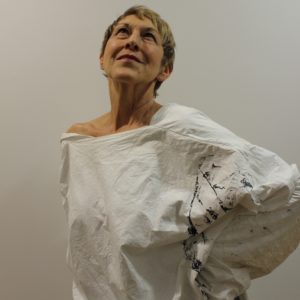 Your bio. Who you are, how your background brings you to this work.

I consider myself a wordsmith – an articulator — of embodied Somatic experience.  I work towards embodied literacy through my own personal movement practice, my teaching and my scholarly research. I also am, in a sense, a meta-physical polyglot, a trans-disciplinary investigator. Over the past four decades, I have sourced from human movement science, embodied cognitive science, rehabilitation medicine, phenomenology, aesthetics and other disciplines that touch upon the affective through-line between sensory awareness, attention, intention and action. I advocate for embodied learning through practice-driven research with the following aims: Emancipating human beings (1) from addiction to the limiting aspects of digital technologies, (2) from conformist, commodified and complicit behaviors that distort human values, and (3) working towards embodied creativity and agency in evolving sustainable bodies/futures.

I have danced in some form all my life. My mother opened The Modern School of Dance Education in Washington, DC (1944), continuing the legacies of Hanya Holm and Ruth St Denis who were her mentors throughout the 1930’s and 40’s. I was, however, not destined for a career in performing arts, finding current approaches to dance training incompatible with my own physicality as well as my personality – one that always was wanting to stretch the boundaries of uni-disciplinarity. Such bridging between disciplines took decades to evolve, more than half century of dialogue that inevitably would change the face of dance training.

My earliest Somatic training was with Irene Dowd (Ideokinesis) with whom I apprenticed for 4 years. Dowd taught me that a love for science was not incompatible with kinesthetic learning, a message that has been had life-long implications and directions. I also trained in the Alexander Technique, teaching in training schools in 13 countries (timelines below). I was pivotal in the development of a Somatics track within the International Association of Dance Medicine and Science, finding consilience in an organization initially resistant to somatic tenets. For 35 years, I introduced and taught numerous courses in Somatics for the American Dance Festival and the Hollins/ADF MFA program and for a number of university dance programs. I also spent 23 years teaching as a professor of physical therapy (now emeritus, Winston-Salem State University, a historically black university in North Carolina). For 20 years, I advocated for Somatic/dance-based approaches to integrative medicine, and most recently pioneered research in improvisational dance for people living with Parkinson’s disease (2008 and 2016).  During the first decade of the 20th century, I promoted my work in Europe. Between 2008 – 2015, I was a visiting fellow at Trinity Laban Conservatoire of Music and Dance (London) and Coventry University UK, and a Fulbright Senior Specialist in dance with residencies at Trinity Laban (2009), University of Tallinn Estonia (2011), and Bath Spa University (2019).  In December of 2018, I was awarded an Honorary Fellowship award by Trinity Laban Conservatoire ‘in recognition for [my] work exploring the interface of dance, human movement science, brain science, and a phenomenological perspective of the lived body.’  CV on request.

I currently consult and participate in local activities with Culture Mill (www.culturemill.org), where dancer-directors Murielle Elizéon and Tommy Noonan are evolving a portals for social justice through movement in underserved areas of rural North Carolina, two projects of which are dance for Parkinson’s and restorative- and other forms of social justice (antidotes, for example, to the modern slavery perpetuated by the US prison system).

My first question revolves around what processes of agency do we need to train, not just empowerment, but recovery of our psychophysical resilience from the onslaught of a society that fragments (separates us) and that robs humanity of its power to support, belong and cooperate? How do we train the processes of ‘with and away’ of multiple vantage points that allow us to deeply engage and at the same time, be a witness to bigger picture? I frequently feel that what I am doing is a form of crypto-critique – reframing people’s ideologies about their bodily selves and allowing them to recognize (and act from) the interwoven mutuality of self, society and the environment.

The second practice-driven question is not so much a question as an effort to understand the  textural dimension within the reciprocity of perception and action – the nature, magnitude, depth, and multiplicity of an attuned Mobius strip of sensing, perceiving and acting. This comes out of my work with Human Origami – The portal of transformation from ordinary- to extra-ordinary life emerges from embodied perceiving within particular constraints – slowed down time frame across a longer duration of attention. The questions that surface are many: How can movers stay ‘in’ the practice – iteratively, recursively – so that an enduring echo of resonance is generated in the moving field? Gerald Edelman has elaborated brain theories of selection and re-entry. How are these in movement practice?

My third area of inquiry revolves around the pluri-potentiality of the stem cell. How do cells induce systems? What self-regulatory processes underscore this intelligence and competence? How can we use movement practices to harness this intelligence for understanding the basis of presence, proximity/distance, bonding, attachment and separation? And, how can focused movement inquiry empower regenerative processes? In part, this question is located within Human Origami – the micro/nano level of folding which gives rise to optimal functioning.